Travel planning can be fun.

But it can also be an overwhelming experience.

Especially if it’s one of your first trips abroad, and you aren’t an experienced traveller yet. What do all those terms and travel phrases mean? How to get everything right, and not ruin your holiday? How not to make silly mistakes? Are you planning a trip right now? And now you’re trying to understand travel industry jargon?

Check out our guide to most common travel terms and industry jargon. 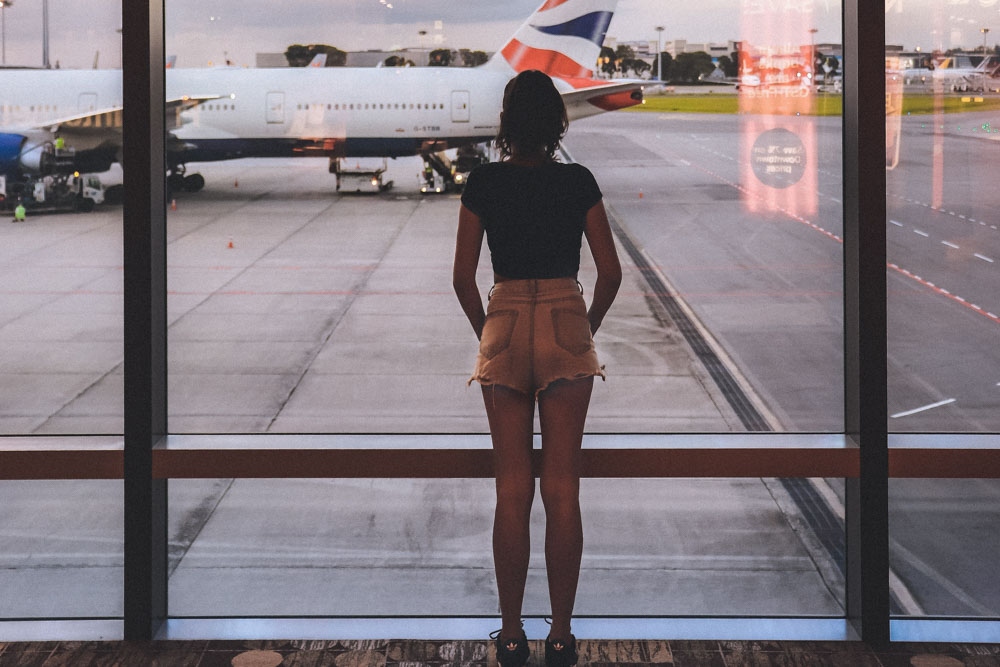 Actual time of arrival - the time when your flight actually lands.

Airport code - a three (IATA) or four (ICAO) letter code used to identify a particular airport. Three letter IATA codes are mainly used for ticketing. The code you see on your ticket is an IATA code.

Airside area - a controlled area in an airport after ticket gates and security check. Passengers with valid boarding passes can enter landside area.

Airport terminal - a building at an airport where passengers go to depart on a flight, or disembark form an aircraft.

Baggage allowance - The weight and volume of bag­gage that may be carried by a passenger without additional charge.

Baggage drop-off - an airline counter where you can check in your luggage (to be put on a plane), if you have already checked in for the flight (online or using self-service check-in kiosks).

Boarding pass - a physical or digital confirmed ticket (for boarding the aircraft) that is issued to a passenger after the check in.

Booking confirmation - an e-mail that is sent to a customer after the booking is made. This e-mail informs the customer that the reservation is definite.

Booking reference number - a unique code which is assigned to every booking. It’s an internal identifier for your flight or hotel within the company's booking system.

Budget airline - low-cost airline or low-cost carrier; an airline that has lower fares and operates with emphasis on minimising operating costs. The tickets are cheap, and budget airlines doesn’t include traditional services and amenities in ticket price to make up for loss of earnings. Wizz Air is one of the most popular budget airlines in Europe.

Bulkhead - a wall which divides the inside of a plane. It separates one class from another on larger planes (e.g., the business class from the economy class). On smaller planes curtains work as a dividing wall (bulkhead).

Bulkhead seat - A seat directly behind the bulkhead. These seats usually have more legroom.

Business class - a class of seating on a plane which is level up from economy class but less expensive than first class. 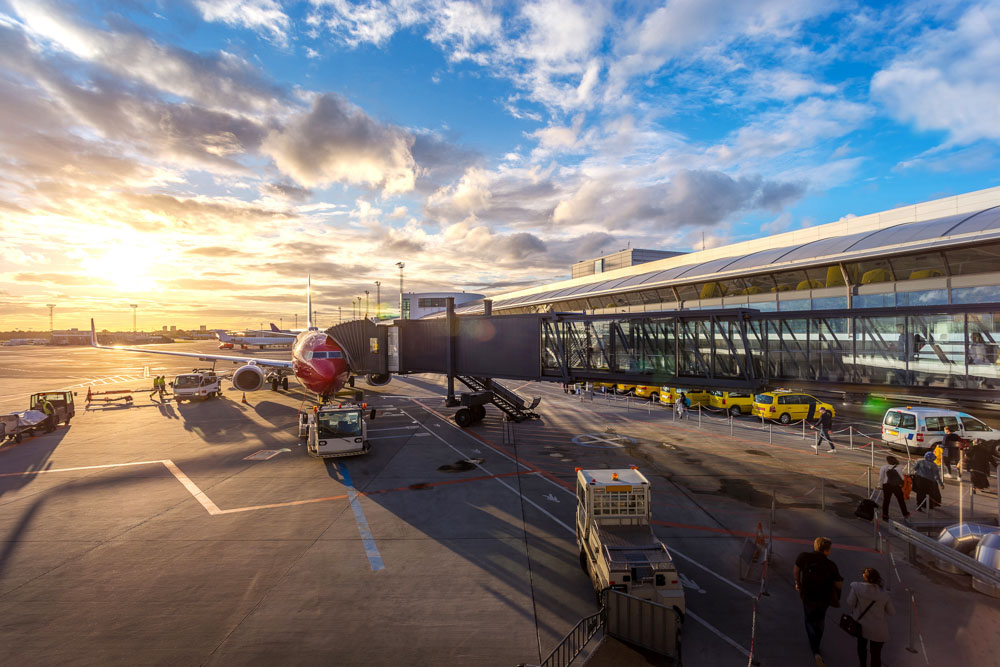 Cabin crew - the members of an aircraft crew who attend to passengers.

Cancellation policy - the terms under which a reservation or booking may be cancelled; and will be there be any penalties by doing so.

Cancellation fee / penalty - an amount of money you must to pay if you cancel your booking after the cancellation deadline.

Carry on baggage - a piece, or pieces, of luggage, you are allowed to take on board at no extra charge. Then there is a whole list of carry on baggage restrictions you have to know about, when going on a trip.

Charter airline - an airline that offers its aircrafts for rent to third-party travel providers. Learn more about your rights when you're travelling with a charter airline.

Charter flight - a flight by an aircraft chartered for a specific journey, not part of an airline's regular schedule.

Checked baggage - a piece, or pieces, of luggage that are put in in the hold of an aircraft.

Check in - a process of arriving and registering at a hotel or airport. Most airlines permit online check-in as well.

Codeshare flight (codeshare agreement) - arrangement where two or more airlines share the same flight. How to claim compensation if it was a codeshare flight?

Customs and immigration - checkpoints through which travellers must pass before they leave the airport.

Direct flight - a commercial flight from Point A to Point B, with no change in flight numbers. Unlike non-stop flight, a direct flight may include one or more stops along its route.

Domestic flight - a flight within a country.

Double room - a room that can accommodate two people, and has one bed. It can be double, queen or king bed.

Dorm room - a large (shared) room containing several beds. Such rooms are generally booked on a per bed basis. 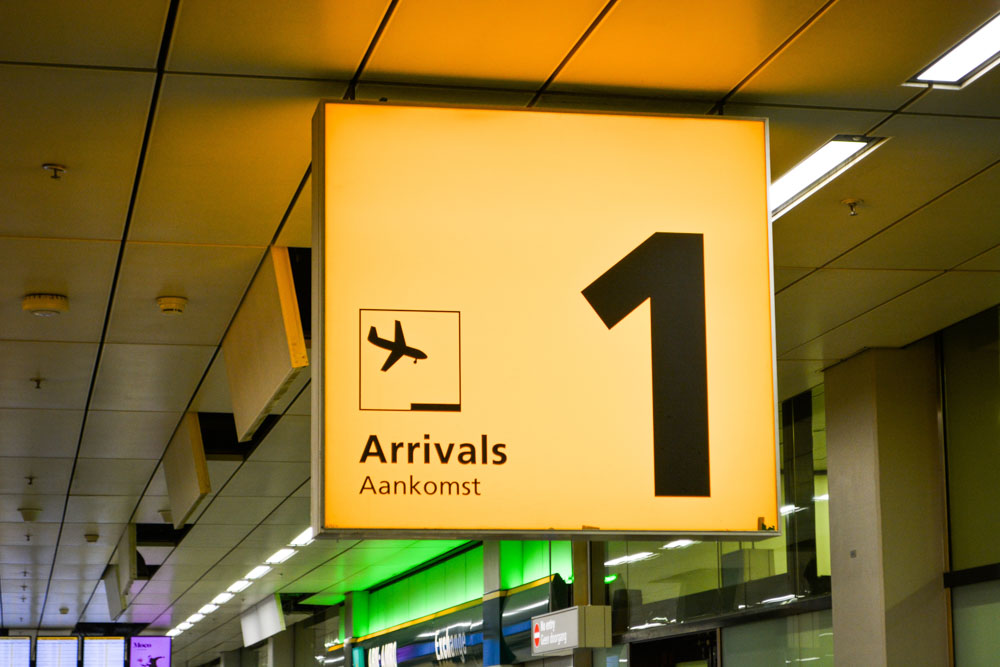 Economy class - usually the cheapest type of seat in a plane. Unless there is also Basic economy.

Economy plus - a travel class offered on some airlines. It’s a class of seating on an aircraft that is superior to economy class but less expensive (and with less comfort) than business class.

Estimated time of arrival (ETA) - the time when an aircraft (or other vehicle) is expected to arrive at a destination.

Estimated Time of Departure (ETD) - the time when an aircraft (or other vehicle) is expected to depart from an airport (bus terminal / train station, etc.).

Fare alert - a notification which is sent to a person’s e-mail when the price for particular flight our route changes. A person has to subscribe in order to receive fare alerts.

Fast track - a paid service (and a dedicated lane at the airport security) which allows to skip the queue at the security check and reach the departure gate faster. One of the ways to get through airport security faster.

5 star airline - an airline that delivers the highest level of service.

First class - a class of seating on an aircraft that is superior to business class.

Flight attendant - a steward or stewardess on an aircraft.

Flight delay - when a flight takes off and/or lands later than planned.

Flying standby - buying a ticket (last minute) for the next available flight with empty seats.

Full service airline - an airline which offers passengers checked baggage, meals, beverages and comforts such as blankets and pillows in the ticket price. There are some major differences between full service and low cost airlines, but they are fading. 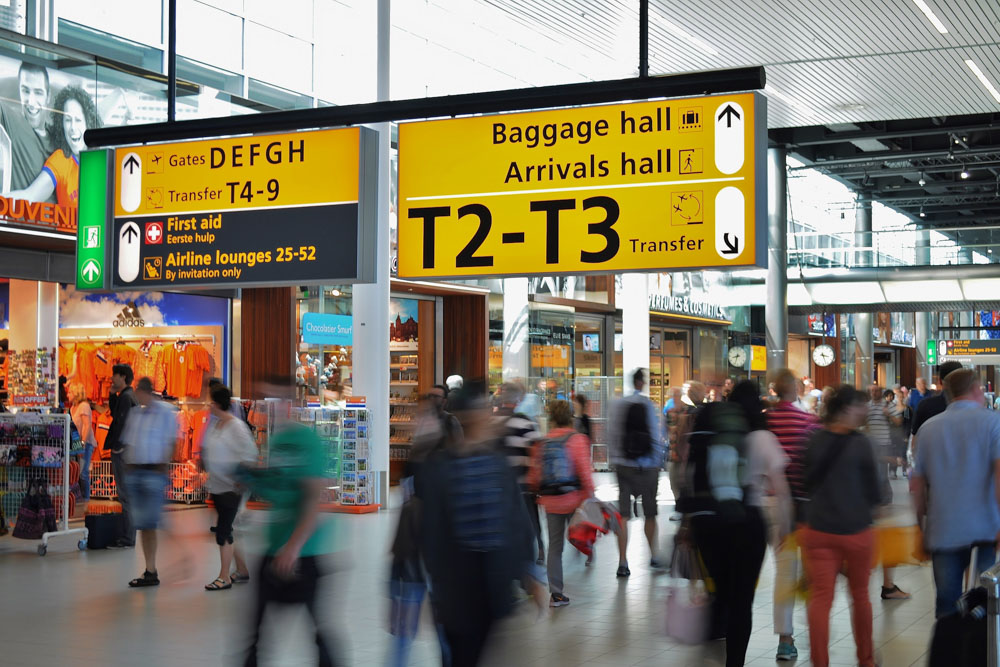 Galley - a section of a ship, train, or aircraft where food is prepared.

High (peak) season - the time when a place receives the most visitors.

Hub - an airport in which an airline has a major presence. Often it’s in the city where the airline was formed.

Itinerary - a travel plan with a list of cities you want to visit, a list of hotels you’ve booked and a list of activities for each day.

International flight - a commercial flight where the departure and the arrival take place in different countries.

Landside area - the opposite to “Airside”. It’s an area in the airport where are no entry restrictions. Any person (even the ones without a boarding pass) is allowed to enter.

Layover - a wait at the airport between two flights.

Legroom - amount of space between your seat and the seat in front of you, in which a passenger can put their legs.

Long-haul flight - a flight lasting more than 6 hours. Learn how to prepare for a long haul flight & what not to forget with you.

Matrix (ITA Software) - an airfare search website made by ITA Software, a travel industry software division of Google. However, it is not possible to buy tickets from “Matrix”.

Multi-city flight - multiple stopovers on the same ticket. You add a couple (or a few) more flights to different cities on the way to your final destination. 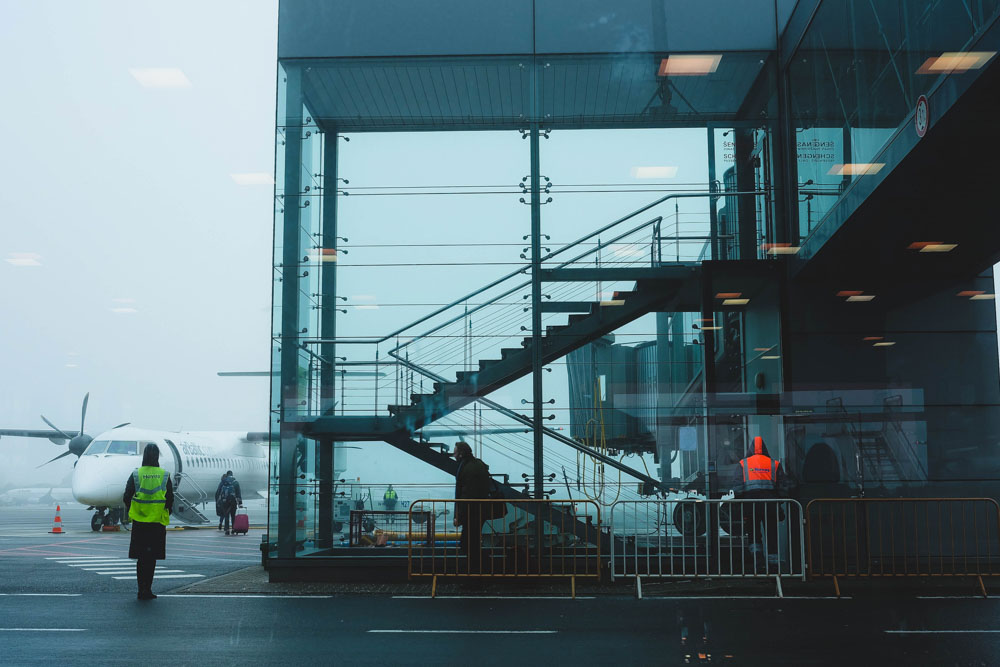 No-show - when a person who has a hotel or flight booking doesn’t turn up and use the booking. Neither do they cancel it.

Non-stop flight - a commercial flight which takes passengers from one airport to another without stopping (unlike direct flight).

Off-season - a time of year when travel business is slack due to low tourist numbers.

Online check-in - a process in which passengers confirm their presence on a flight via the Internet.

Open-jaw flight - a return ticket where the destination and/or the origin are not the same. For example, a flight which flies from Point A to Point B, then from Point C back to Point A.

Overbooking - accept more reservations for (a flight or hotel) than there are seats, rooms, places, tickets, etc.

Oversized baggage - bags that are over the general size limitations.

Priority boarding - a service offered by budget airlines. This service allows passengers to skip the queue at the gate and board the aircraft faster. Some budget airlines allow their priority passengers one extra bag on board.

Red eye flight - a long haul flight that scheduled to depart at night or late evening and arrive the next morning.

Roundtrip - a journey (on a flight, train, bus) to a place and back again. 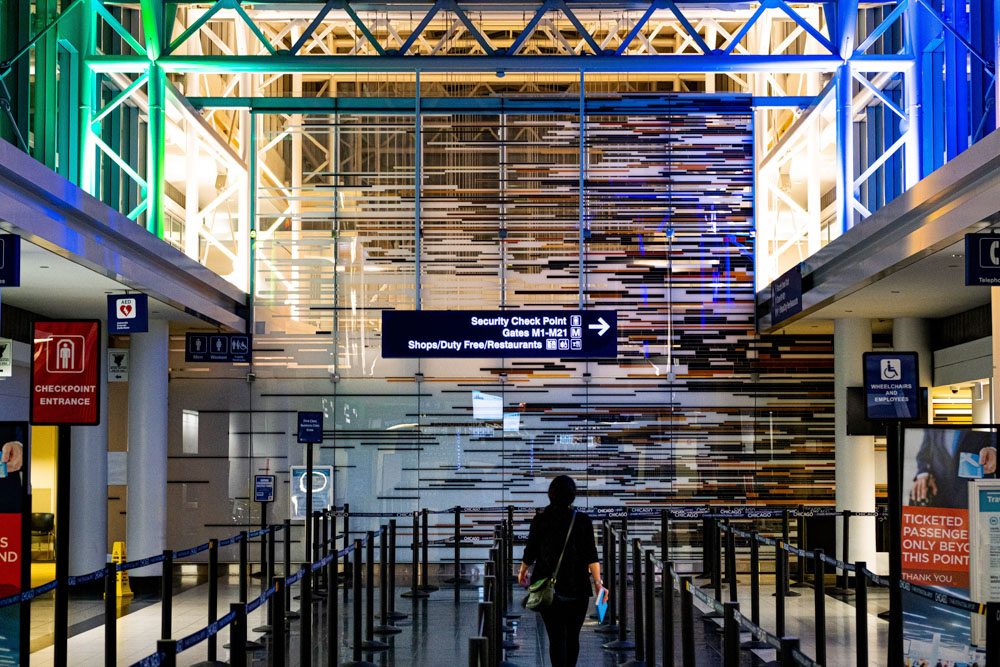 Scheduled, or standard, time of arrival - the time your flight should have arrived at the destination.

Scheduled departure time - the time your flight should have departed, and it is specified on the boarding pass and in the schedules.

Scheduled flight - a flight that operates regularly and is planned a long time before.

Self-service check-in kiosk - a machine which a passenger can use to check-in for their flight.

Self transfer - buying separate flights (not travelling on the same ticket) from different airlines or the same budget airline which doesn’t offer connecting flights. In which cases the passenger is responsible for the connection.

Shoulder season - a time just after the peak season and before the off season.

Single room - a room that can accommodate one person, and has one single bed.

Suite - a set of connected room (under one room number).

Transfer - prearranged transport from one place to another. E.g., from an airport to a hotel.

Transit area - an area in an airport (airside) for the passengers. For connecting passengers: visa is not necessary if a passenger stays in the transit area.

Transit visa - a permission to pass through a country.

Transit passenger - a passenger who has a layover in an airport transit area and does’t leave the airport.

Travel agent – An individual or company that sell travel services on a commission basis.

Travel agency – Usually used in the travel industry to refer to an ARC-appointed storefront retailer.

Travel insurance - insurance coverage for risks associated with traveling such as loss of luggage, delays, and death or injury while in a foreign country.

Triple room - a room that can comfortably accommodate three people.

Trip cancellation insurance - reimburses a person for non refundable trip costs if they have to cancel the trip. Covered reasons: injury, sickness, or death of a family member, or a traveling companion.

Twin room - a room that can accommodate two people, and has two separate single beds.

Visa - a permission to enter the country and stay there for a specified period of time.

Visa free entry - no visa is needed to enter the country.

Voucher - a digital or physical coupon that entitles its holder to a discount, or can be exchanged for goods or services.

Have a great trip!